Bad IRP Decision? What Can You Do About It?

← How much jail time could you face if found guilty of sexual assault? Understanding Your Rights at a Roadblock → 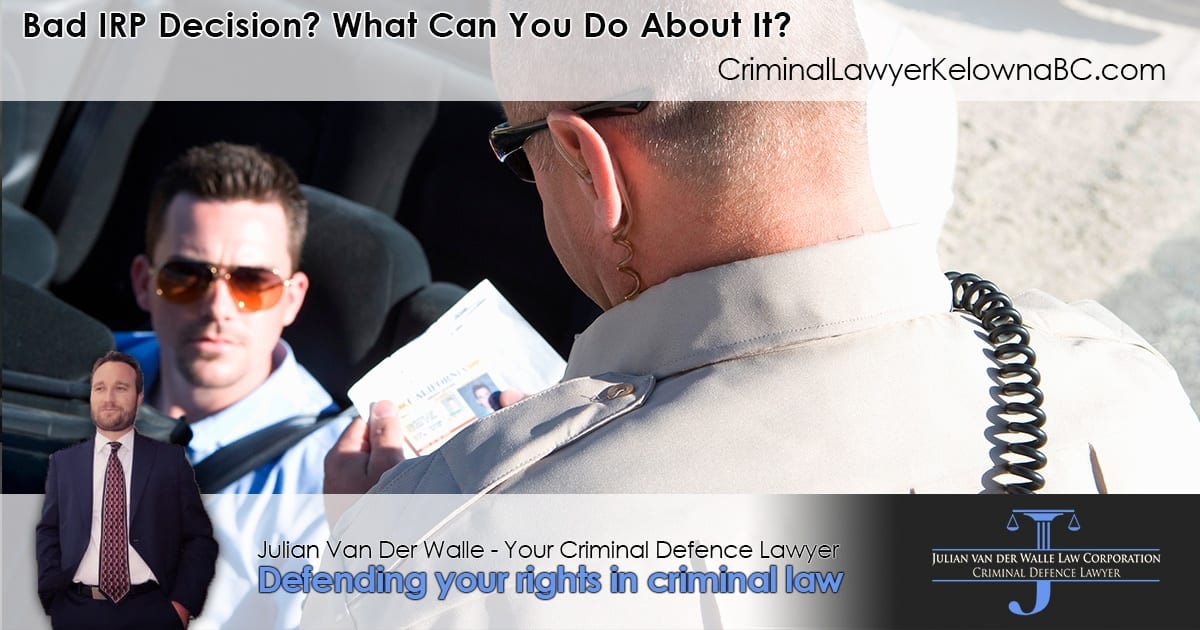 Bad IRP Decision? What Can You Do About It?

Drivers who are caught driving under the influence by the police may receive an Immediate Roadside Prohibition (IRP) on driving. An IRP is a temporary driving suspension that prevents the recipient from driving for a set period of time as punishment for driving under the influence of alcohol. IRPs are designed to help make the roads safer from those who habitually violate the rules of the road; however, they can greatly disrupt the lives of the recipients.

If you have received an IRP, an adjudicator will review your case to determine if the IRP was proper. If you lose the review you can appeal the adjudicator’s decision. This article briefly describes the appeals process to help prepare you for what to expect if you need to appeal your case to the Supreme Court of British Columbia.

The Right of Judicial Review in British Columbia

In BC, all IRP recipients have the right to appeal an adjudicator’s ruling if they choose to do so.  To file an appeal from a negative adjudication in British Columbia, a person must file a petition to the Supreme Court of British Columbia. Correctly filing the petition is very important to preserve the right of appeal, and so IRP recipients are encouraged to hire a criminal defense lawyer to ensure that the petition is filed properly.

How the Judges Will Review the Appeal

Unfortunately, it is difficult to predict what the judges of the Supreme Court will believe is “reasonable.” A ruling is not unreasonable simply because the petitioner disagrees with the decision. Instead, a ruling is reasonable if it had a legal justification if the decision’s reasoning was transparent, and if the decision was intelligible.

Appeal for a Stay of the Driving Prohibition

Often, a driving prohibition will begin to apply before the petition is heard in court and the BC Supreme Court Judge gives their decision. This is particularly common with IRPs. If you have a good reason to believe that you will win your case, then you can apply to stay your driving prohibition until the outcome of your appeal/petition.

Should I Hire a Criminal Defense Attorney?

Attorneys can help you navigate courtroom procedure and ensure that your appeal is correctly filed. Also, because an appeal centers on issues of law rather than issues of fact, it is important to hire an advocate who knows the law and can properly argue a case on a valid appealable issue. While many commonly-cited studies show that the winning percentages for unrepresented parties at the initial hearing are low, the winning percentages for unrepresented parties on appeal is even lower. It is never too late to hire an attorney to assist in your appeal, and you always have a right to representation in court.

Does drug addiction cause more crime?

As a whole, the Canadian justice system is very fair. The accused enjoy the right to be present and be heard in court, the right to remain silent, and the right to representation by legal counsel. That last right is one of the most important rights of...

END_OF_DOCUMENT_TOKEN_TO_BE_REPLACED

Why You Should Hire a Kelowna Criminal Defense Attorney

As a whole, the Canadian justice system is very fair. The accused enjoy the right to be present and be heard in court, the right to remain silent, and the right to representation by legal counsel. That last right is one of the most important rights of...

END_OF_DOCUMENT_TOKEN_TO_BE_REPLACED

Understanding Your Rights at a Roadblock

Roadblocks are a tool commonly used by the police in Canada to detect traffic infractions and alcohol violations on a large scale. In most cases, drivers will see roadblocks set up on major roads on holiday weekends or late at night around the time when...

END_OF_DOCUMENT_TOKEN_TO_BE_REPLACED

Fill out the form below to receive a free and confidential initial consultation.